You are here: Home1 / News2 / Posts3 / Sensors that make sense: from farming to water control

Ivan Andonovic is a researcher in communication systems at the University of Strathclyde in Glasgow, which is a partner of the project. “What’s happened with the technological evolution over the last ten years is that processing power has become cheaper, the energy spent in processing has dropped, and the functionality – the form factor, the shape, the size of it – is much more manageable. It’s only under those criteria that you can use technology to create an economic solution for the farming sector,” he says.

According to Freddie Reed, project manager at agritech innovation centre the Agri-EPI Centre, “The first stage of it is to find the extent of issues, collect the data over the farms, so we know what’s going on on the farm, then we can identify the causes of inefficiencies on the farm, and once we know the causes we can find the problems to solve those solutions.”

“The way we can have a real impact and make life even easier for Brian and his colleagues in this sector is to create a consistent and coherent database which takes both the data coming in, the collar system, and the output, the robot system, and then match input to output,” says researcher Ivan Andonovic. 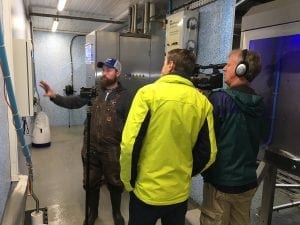 To find out more about Agri-EPI Centre please get in touch.